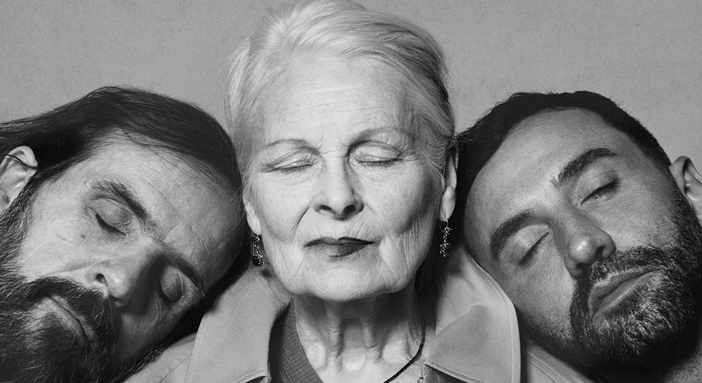 The limited collection is the brainchild of Creative Director Riccardo Tisci, Vivienne Westwood, and Andreas Kronthaler, featuring diverse cast as muses such as Kate Moss, Sistren, DelaRosa, Leonard Emmanuel, and many others. From the campaign photos taken by David Sims in London, it seems clear that the collection features eclectic-looking pieces.

For example, expect a classic Burberry plaid coat with idiosyncratic cuts. The collection reimagines Vivienne Westwood’s iconic hugger jacket, double-breasted jacket, and mini kilt into Burberry’s character. The looks are mostly unisex, quirky, yet classy. Among all, we personally love the laced platform shoes wrapped in Burberry vintage checks. There are also accessories like beret.

The inspiration for the designs is taken from Vivienne Westwood’s 90s collection, such as the hugger jacket and mini-kilt from the 1993 Anglomania collection. The original mini skirt worn by Kate Moss from 1994 is also being reimagined in the campaign.

This would be the first collaboration collection of Burberry under Riccardo Tisci. The designer commented on Vivienne, “She is a rebel, a punk and unrivaled in her representation of British style, which has inspired so many of us. I am so incredibly proud of what we created together.”

Unfortunately, the collection will only be available in selected worldwide stores, including Regent Street London, Omotosando Tokyo, Kerry Center Shanghai, George Street Sidney, and Soho New York. The collection will be sold from £55 and some parts of the profit will be donated for Cool Earth, a UK-based non-profit organization that works alongside rainforest communities.