It is time to stack extra-warm clothings into our suitcase and mark our calendar to go around the globe, tasting sundry festivity of winter festivals in northern part of the world!

The special winter illumination event in Niagara Falls at Queen Victoria Park, Canada, is a cherished event that attracts over one million visitors annually. Organized by Ontario Power Generation, this year’s Winter Festival of Lights marks their 35th season of capturing the magic of the holiday. Indulge in an 8km long illumination route that runs through the iconic Niagara Falls, Dufferin Islands and surrounding tourist districts, including The grand Zimmerman Fountain, animal displays, and Skylon Tower. (Photos: ©WFOL.com) Returning for their 13th year, the world’s only Ice Music Festival will be held at a new location, the exotic Finse mountain in Norway. In this festival, the temperature may dip down to below -20°C, making it the perfect condition to sculpt and keep the musical instruments. Pack your warmest clothing and get ready to chill to some really cool music. This may be the first time you will lay an eye on glacial instruments such as ice drums, icephon, tubice, and more. (Photos: Emile Holba, icemusicfestival.no) 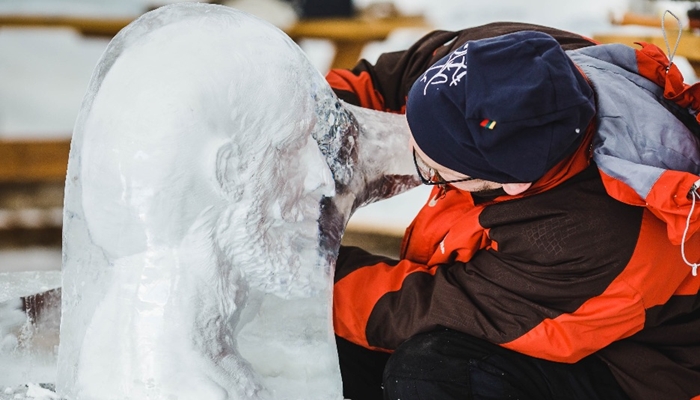 Last year, 32 professional sculptors from European countries gathered in Jelgava, Latvia, to participate in the sculpture competitions.There were a plethora of activities for all ages to enjoy; an ice workshop for children, ice sculpture carving demonstrations, 3D multimedia installation, music performances, and fireworks. This winter, the festival is scheduled to be held in Jelgava once again. Visitors can expect to see ice sculptures of various shapes and forms for the competition in venue, alongside multiple ice-based objects such as ice bar, demo sculptures and photo sculptures. (Photos: icelv.lv)

Elaborate masks and costumes, whimsical performances, and an opulent masquerade dinner ball are all part of the annual Carneval di Venezia, or Carnival of Venice. It is at this celebration that Venice is at its most festive and colorful, garnering up to 3 million visitors worldwide each year. Free and open to public, candle-lit parade of boats, concerts, and street performances, are joyous most popular with tourists. During the events of the carnival, expect to see the iconic Venetian masks worn by festival-goers. These traditional masks were said to be a fixture of Carnevale celebrations from the Renaissance era. (Photos: carnevale.venezia.it ) Not all wintertime festivals involve snow and ice. The Fête du Citron in France involves 145 tons of citrus fruits, 500 thousand elastics, and 15 tons of metal instead. Attracting over 240 thousand visitors annually, the Festival of Lemons will add zest to your winter!  In Biovès garden, giant sculptures built with citrus are on full-exhibit, taking thousands of hours to make with fruits painstakingly placed one at a time. The central focus of the event is a high energy parade of citrus mobiles driving through Promenade du Soleil, that is occasionally splashed with a burst of confetti. (Photos: fete-du-citron.com)

The Fur Rendezvous or Fur Rondy, as it’s locally known, has been held since 1935 in Anchorage, the largest city in the state of Alaska. Today, it is Alaska’s biggest winter festival to date, with 10 whole days of events that celebrate life in the Last Frontier. Featuring nearly 50 Rondy Round Town events, the festival also offers more than 20 official cultural and sporting activities. Other highlights of this festival include the Rondy Carnival, Charlotte Jensen Native Arts Market, Frostbite Footrace, and Running of the Reindeer. (Photos: furrondy.net)

Read the full-version of this article on our upcoming Celebration Issue, available this December in your nearest bookstores!